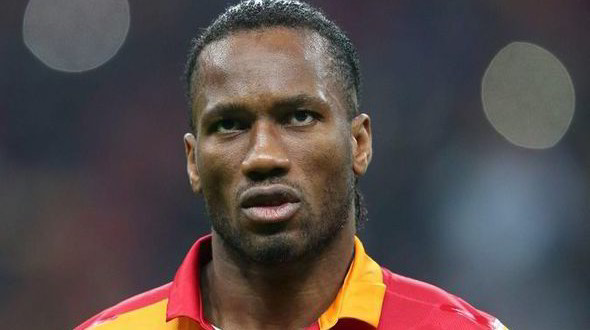 Ivory Coast international Didier Drogba is reportedly in discussion with Chelsea for a possible return to Stamford Bridge.

Manager Jose Mourinho wants to bring Chelsea’s former talisman back to the Bridge as his second striker and also give him some coaching responsibilities to enhance and develop his roles in the club according to the British paper Daily Mail.

The Portuguese enjoyed a considerable success spell with the Ivory Coast international between the years 2004 and 2007 in his first stint as manager for the English side.

Drogba’s last goal for the English side was the penalty that confirmed Chelsea’s first ever Champions League trophy in a difficult final against German side Bayern Munich on the latter’s home turf at the Allianz Arena and ended in a tensed penalty shoot-out.

The 36-year old had also scored a late regular-time goal that pushed the match to extra time and is regarded with reverence by Chelsea fans across the globe.

Mourinho is in need of extra strength in his forward line-up following Samuel Eto’o’s imminent departure. Romelu Lukaku and Demba Ba are also widely expected to leave the Bridge, though on loan. The currently-not-in-form Fernando Torres is said to be keen to stay at Chelsea despite speculation that Italian side Inter Milan are interested in his services.

Drogba had earlier in May indicated a desire to leave Turkish side Galatasaray when the transfer window is opened this summer, with many football analysts suspecting that he was using this to open a prospect for a Chelsea return, adding that his heart has never really left London.

Drogba is also said to be a target for several Qatari clubs, who are reportedly offering him a post-tax salary of about 3 million pounds per season, but the prospect of a return to London is something which both Drogba and Mourinho are willing to discuss.