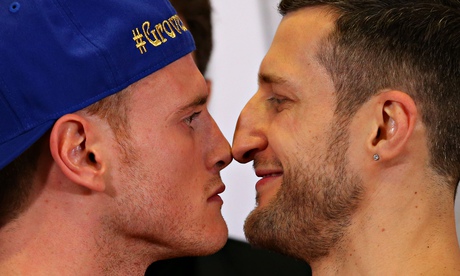 Belts on the line – WBA and IBF super-middleweight

It’s being called the biggest fight in British Boxing history, Carl Froch takes on George Groves at Wembley Stadium this Saturday evening after the first fight ended in ‘controversial’ circumstances.  Carl Froch won the first fight by stoppage despite going down in the very first round.  The stoppage has been called ‘premature’ by many experts and George Groves will get a much deserved second chance to settle the score.

A lot has been said from both parties in the build-up to this fight:

Carl Froch on the first fight: – “George Groves has been going to the opening of an envelope, dinning out on his round one knockdown against The Cobra and giving it large. But that’s his prerogative if he is enjoying the moment his little time his little five minutes of fame then you know he should do he should enjoy it, but really he should be concentrating on his fighting and his boxing.

“I hit George Groves with an over hand right hand that he didn’t see coming and his legs stiffened and he stumbled towards me. He grabbed my legs, the ref saw that and I saw it. George was gone; he was in serious, serious trouble. I shoved him off of me, backed him up against the ropes, landed a right hand, a left hook landed, another right hand, another left hook. He was stumbling looking like he was trying to do something, and he was gone looking at the floor, his arms was slumped and his head was slumped. I would have preferred the fight to have gone on longer because I was on top I was in control I was doing what I do I was punishing him and lining him up for the big finish.

“I never think about my opponent really unless he is mentioned. I don’t need to think about it I need to worry about myself I have probably been thinking too much about George Groves in the first fight in the training camp on the first build up to the fight I was probably thinking about him too much and that was part of his game plan to get under my skin and wind me up.

“It was effective and it worked but it will not happen twice – no chance. I might be stupid for the first one but I’m not double stupid, and I won’t make the same mistake twice. I can think about George, I cannot think about him, I can listen to him, I cannot listen to him, it’s all a bit ‘whatever, in one ear and out the other’. I’m just not paying any attention to him.”

“He is not a fighting man, he doesn’t stalk people, he doesn’t pressure fight, he doesn’t back people up with aggression. He likes to stand at long range flick out a jab and hope that switches his opponent off enough so that he can dive in gun-slinging punching from the hip, crossing his feet, after two three punches digging his heels in deep enough so he can keep punching.

“Every time he gets caught he wants to go and trade he only ever trades like that when he has no other options so again coming back to that warrior mentality. I feel like it’s a false truth because if he could sit and dance and look pretty then he would but he doesn’t have to ability to do that so it’s always back against the wall stuff with him. If you go back and look at his fights it’s always desperation and for that that’s the reason why you’ll see him fight he way he fights.

“If he wants to concentrate on the physical aspect and that he feels he can be physically superior or superior enough that he has won the fight before he enters the ring; I wish him luck. He’s eleven years older than me, he’s coming off the back of a horrific beating and if he trying to do something different and runs the risk of over training.

“He’s on his fight weight eight weeks out. You ask any World class fighter out there – that’s never a good idea. He can sit there and try and take confidence from the way I make weight, I might drop a couple of pounds the night before – it makes no blind a difference to me.”

In the first fight, Carl Froch was massive favourite with bookmakers to come out on top however this time around, the odds are much closer..